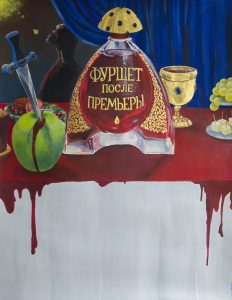 The curtains have just closed on the long-awaited premiere of Shakespeare’s Othello and the actors stay after the play to celebrate the opening night. Unfortunately, the party is marred by a mysterious death, and there is a suspicion that a party participant may be involved. Gloomy, yet humorous, with “whodunnit” intrigue plot twists to an unexpected finale; Premiere After-Party is riveting until the very end.

The world premiere was staged in 2010 by Russia’s most famous theater director – Roman Viktyuk – to critical acclaim and has been hailed as an enormous success.

In Russian with English subtitles. Please request in advance.

We accept payment for tickets in cash at the door.